Issue with how HTML is sanitized in polls

This poll with "<input type="date">" as an option has the entire HTML tag sanitized away to nothing, instead of displaying the text of the tag as expected. Additionally, the third option has a "<select>" tag that gets sanitized away.

How the poll looks on the originating Mastodon 3.0.1 instance: 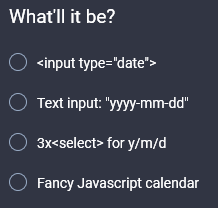 Worth noting that this could possibly be Mastodon's issue instead (sending < and > instead of &lt; and &gt;, when it's clearly sanitizing to &lt; and &gt; for viewers on its own platform).